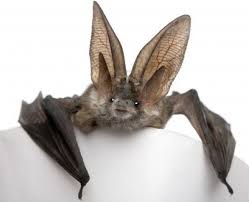 Bat Thought to be Extinct Found 120 Years After Last Sighting

Pharotis imogene, a big-eared bat thought to be extinct for the last 120 years has been found in the forests  Papua New Guinea by student researchers from the University of Queensland during a field expedition.

This species of bat was initially discovered by an Italian scientist in 1890 in Papua New Guinea.  The  Pharotis imogene had not been spotted since, leaving scientists to believe that the species had gone extinct.

Unfortunately, the specimen caught was euthanized and loaned to the Australian Museum in Sydney, where it was identified as being the long-lost species, the common name being the New Guinea big-eared bat.  The bat is distinguished by a combination of two features: large ears about the size of its head, and a simple “nose-leaf” structure immediately behind the nostrils. Collectively, the group of species is known as long-eared (or big-eared) bats. P. imogene has larger ears than most.

Books about BATS on Amazon

Learning more about the entire species through this recently caught specimen will help researchers in identifying species in the field, and learn more about what conservation measures are needed to protect this and other bat species in Papua New Guinea. The New Guinea big-eared bat is listed as critically endangered (possibly extinct) by IUCN, as well as making it to the top 100 of the world’s most unique and endangered mammals.

Many of the coastal lowland habitats throughout Papua New Guinea are among the most threatened in the country due to clearing for logging and agriculture, and more field surveys of local bat populations could assess the conservation status of the species and inform future strategies to ensure their preservation.

Papua New Guinea is one of the world’s biodiversity hotspots. The country accounts for about 7 percent of the world’s species diversity, with about 276 known mammal species, 314 freshwater fish, 641 amphibian and reptile species, 740 birds, and many more. According to the World Wildlife Fund, between 1998 and 2008, 1060 new species were discovered, including a blue-eyed spotted cuscus, a 2.5 meter freshwater shark, and a giant bent-toed gecko.” And now, the rediscovery of a bat species not sighted in 120 years. The new capture location means the researchers know where to start looking to gather more data on this and other bat species, and sites for further ecological studies that can help in conservation efforts.

Click here to read more about the Pharotis imogene, the bat thought to be extinct.