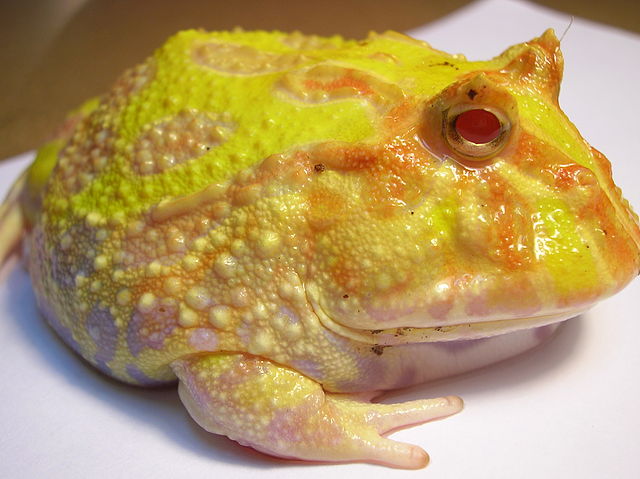 Get ready for some cuteness!

The South American Horned Frog‘s scientific name is Ceratophrys ornata is a genus of frogs in the family Leptodactylidae, subfamily Ceratophryinae. They are also known as Pacman frogs. These frogs are relatively common in the pet trade and get their common (pet trade) name from the popular Pac-Man video game due to the frog’s generally rounded appearance and a characteristically large mouth.

The South American Horned Frog, or Pacman frogs, are terrestrial in nature and have a reputation for being somewhat aggressive, which is largely undeserved.  While they do sometimes bite, it is usually when the frog feels threatened or simply mistaking a finger for food.  They are very poor swimmers and care must be taken that they do not drown in their water bowls while in captivity.

The Pacman frogs are quite large and can grow to be about 6 or 7 inches in length (15-17 cm), although males tend to be quite a bit smaller than females. They are generally about as wide as they are long, so they are quite hefty for a frog. Their appetite matches their size, and they will pretty much eat anything that moves.

The female frog will not “chirp” or “croak” as often as males but do sometimes. Males frequently have spotted chests, and at about a year old the males develop spots on their “pads” or “fingers.” Males will also sometimes have subtle pads on their front legs during mating season.

Care of the South American Horned Frog in Captivity

In captivity, Pacman frogs, despite their large size, are not very active and do not need a large cage.  They can live in a 10-gallon aquarium for their entire lives.

In the wild their environment is humid and they spend much of their time in damp leaf litter.  In captivity, Horned Frog cages should have a loose, moist substrate of leaf litter, moss, or coconut husk fiber, and some plants (live or artificial) so the frog can burrow or hide in.  This substrate should be misted daily to ensure proper humidity. Temperatures should be maintained between 75° and 80° Fahrenheit (24° to 27° Celsius) during the day and can drop a few degrees at night.  Heating can be provided in colder seasons, and is best supplied by an under tank heater as overhead incandescent bulbs can be too drying.

See Also:
How to Care for Live Crickets, Keeping Your Crickets Alive

In addition, a shallow bowl or dish of water should be provided, to minimize the risk of the frog drowning.  They will commonly cover themselves with the substrate or just sit contentedly in the water.  Depending on how humid your tank is, the frog might spend much of its time in its water dish, so providing plants around the dish will help your frog feel secure. The water dish should also be in a warmer part of the cage.

A fluorescent fixture can be used for lighting, although they might prefer more subdued lighting and regular room light may be enough. A 12-hour light – 12-hour dark cycle can be provided. The use of full-spectrum lighting for amphibians is somewhat controversial but probably isn’t strictly necessary if a balanced diet is provided. The tank should be away from direct sunlight, to prevent overheating.

Pacman frogs can be fed crickets, earthworms, silkworms, phoenix worms, butterworms, and occasionally guppies, mice, and waxworms.  These should be gut loaded prior to feeding (see “Raising Crickets for Food“).   (Mealworms and superworms should NOT be fed to them, due to their hard chitinous shell.)

Pacman frogs are also known to be cannibalistic and have been known to eat their mates, even if they are larger than they are.  It is advisable to isolate multiple frogs and keep them in separate cages.

Although these frogs can swallow animals almost half their size, they sometimes attempt to eat things larger than they are.  A row of sharp bony projections in their upper jaw makes it nearly impossible for them to release prey after taking it in their mouth, in some cases leading to death by choking.

The lifespan of the South American Horned Frog


The average lifespan of a Ceratophrys frog in the wild varies between 1 and 4 years, though in captivity and as pets, depending on diet, they may live 6 to 10 years and even longer.

South American Horned Frogs are fairly easy to take care of and are interesting as pets. Keep in mind that these frogs are not very active so if you’re looking for a pet to interact with, this might not be the best choice.

MY QUESTION FOR YOU TODAY:  What do you think?  Cute?  Do you have any frogs?  Reptiles? 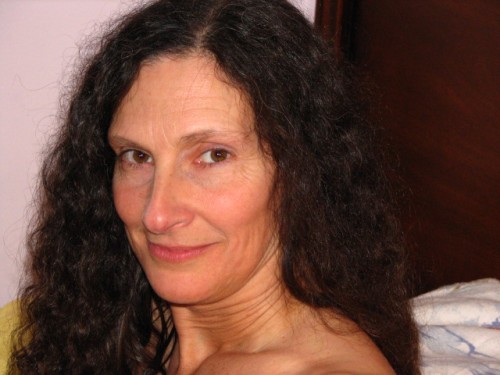