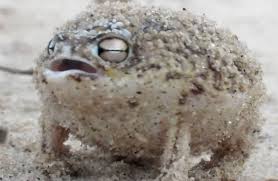 The Desert Rain Frog is a small, plump species with bulging eyes, a short snout, short limbs, spade-like feet, and webbed toes. On the underside, it has a transparent area of skin through which its internal organs can be seen. Its color is yellowish-brown and it often has sand adhering to its skin.

Oh, and it’s the cutest little frog in the world, in my opinion. What do you think?

Photographer Dean Boshoff recorded a short clip of the high-frequency defensive cry of the Desert rain frog (Breviceps macrops) while walking along the sand dunes in Port Nolloth, a coastal town in the Northern Cape province in South Africa.  He dubbed it “its fearsome war cry.”  Check it out.  This video has gotten over 9 million views on YouTube and has been covered by CNN.   You’re going to love this.

Desert Rain Frog – Where it lives

The desert rain frog is regularly found along a coastal strip of land about 10 kilometers (6.2 mi) wide in Namibia and South Africa. This area of sand dunes often has sea fog rolling in which supplies some moisture in an otherwise arid region.  The locations in which this frog is found have at least one hundred foggy days per year. 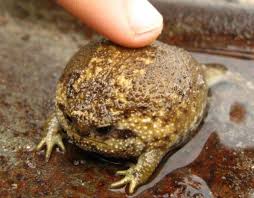 The desert rain frog is nocturnal, spending the day in a burrow which it has dug to a depth of 10 to 20 centimeters (3.9 to 7.9 in) where the sand is moist. It emerges on both foggy and clear nights and wanders about over the surface of the dunes. Its footprints are distinctive and are often found around patches of dung where it is presumed to feed on moths, beetles, and insect larvae. It digs its way into the sand in the morning and its presence in a locality can be deduced from the little pile of loose sand dislodged by its burrowing activities.  Breeding is by direct development of eggs laid in its burrow and there is no aqueous tadpole stage

The desert rain frog is listed as “Vulnerable” in the IUCN Red List of Threatened Species. Its total range is smaller than 2,000 square kilometers (770 sq mi) and is fragmented and the number of individual frogs seems to be decreasing. It is threatened by habitat loss caused by opencast diamond mining, road making, and increased human settlement. 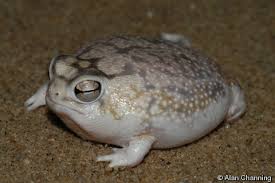 Dean Boshoff is a wildlife enthusiast and photographer with a particular interest in the reptiles of Southern Africa.  Visit his site to see more photographs of the peculiar Desert rain frog, as well as other reptiles Dean Boshoff encounters along the way! 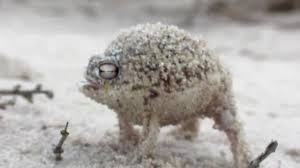 4 thoughts on “Hear the Mighty Roar of the DESERT RAIN FROG, World’s Cutest Frog Ever”