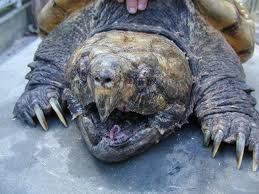 This is one huge alligator snapping turtle, you’ll have to agree.  Check out this news video of the gigantic turtle that was rescued by two men in Baton Rouge, Louisiana.  It took them 45 minutes to get him out of the drainage culvert.

Holy moly!  You don’t want to get too close to that thing.  They call it an “alligator” snapping turtle for a reason!  But actually, despite their reputation, they are typically not prone to biting, but if provoked are quite capable of delivering a bite with their powerful jaws which can cause significant harm to a human, easily amputating fingers.  Ouch! The huge alligator snapping turtle is the largest freshwater turtle in the world based on weight. Although it was once believed to be only one species, a recent study suggests that it is actually three separate species. It is often associated with, but not closely related to, the common snapping turtle. They are the sole living member of the genus Macrochelys, while common snappers are in the genus Chelydra. 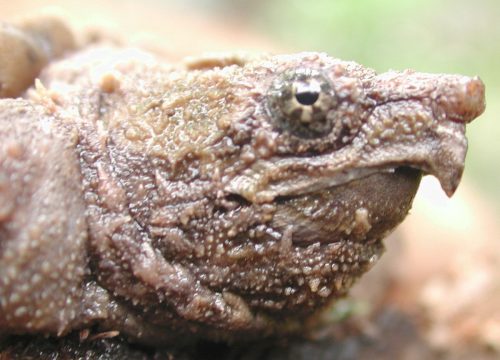 The alligator snapping turtle is characterized by a large, heavy head, and a long, thick shell with three dorsal ridges of large scales (osteoderms), giving it a primitive appearance reminiscent of some of the plated dinosaurs. They can be immediately distinguished from the common snapping turtle by the three distinct rows of spikes and raised plates on the carapace, whereas the common snapping turtle has a smoother carapace. They are a solid gray, brown, black, or olive-green in color, and often covered with algae. They have radiating yellow patterns around their eyes, serving to break up the outline of the eyes to keep the turtle camouflaged. Their eyes are also surrounded by a star-shaped arrangement of fleshy, filamentous “eyelashes”.

Though not verified, a 183 kg (403 lb) alligator snapping turtle was found in Kansas in 1937, but the largest verifiable one is debatable. One weighed at the Shedd Aquarium in Chicago was a 16-year resident giant alligator snapper weighing 113 kg (249 lb).  Another weighing 107 kg (236 lb) was housed at the Brookfield Zoo in suburban Chicago. They generally do not grow quite that large. Breeding maturity is attained at around 16 kg (35 lb) when the length is around 38 cm (15 in), but then they continue to grow through life. Adult alligator snapping turtles generally range in carapace length from 40.4 to 80.8 cm (15.9 to 31.8 in) and weigh from 68 to 80 kg (150 to 176 lb).  Males are typically larger than females.

The inside of the turtle’s mouth is camouflaged, and it possesses a vermiform (literally, “worm-shaped”) appendage on the tip of its tongue used to lure fish, a form of Peckhamian mimicry. The turtle hunts by lying motionless in the water with its mouth wide open. The vermiform tongue imitates the movements of a worm, luring prey to the turtle’s mouth. The mouth is then closed with tremendous speed and force, completing the ambush. Contrary to claims that alligator snapping turtles possess one of the strongest bite force of any animal, it has been recorded at 158 ± 18 kg (1,550 ± 180 N; 348 ± 40 lb), which is lower than several other species of turtles and at about the same level as humans, relative to the turtle’s body size.  Still, these turtles must be handled with extreme care and considered potentially dangerous. This species can bite through the handle of a broom and rare cases have been reported where human fingers have been cleanly bitten off by the species.   No human deaths have been reported to have been caused by alligator snapping turtles. 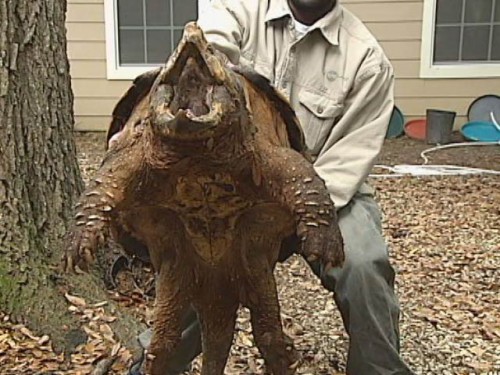 Alligator snappers are opportunistic feeders that are almost entirely carnivorous. They rely on both live food caught by themselves and dead organisms which they scavenge. In general, they will eat almost anything they can catch.  Their natural diets consist primarily of fish and fish carcasses (often ones that are thrown back into the water by fishermen), mollusks, carrion, and amphibians, but they are also known to eat snakes, crayfish, worms, water birds, aquatic plants, and other turtles.  In one study conducted in Louisiana, 79.8% of the stomach contents of adult alligator snapping turtles was found to be comprised by other turtles.  This species may also, on occasion, prey on aquatic rodents, including nutrias and muskrats or even snatch small to mid-sized other mammals, including squirrels, opossums, raccoons, and armadillos when they attempt to swim or come to the water’s edge.  The huge alligator snapping turtles seemingly most often hunt at night. Though not a regular food source for them, adult alligator snappers have even been known to kill and eat small American alligators.  In captivity, they may consume almost any kind of meat provided, including beef, chicken, and pork. They will refuse to eat if exposed to extreme temperatures.

Maturity is reached at around 12 years of age.  Mating takes place yearly, in early spring in the southern part of their total range, and later spring in the north. The female builds a nest and lays a clutch of 10–50 eggs about two months later. The gender of the young depends on the temperature at which the eggs are incubated. Nests are typically excavated at least 50 yards from the water’s edge to prevent them from being flooded and drowned. Incubation takes from 100 to 140 days, and hatchlings emerge in the early fall. Though their potential lifespans in the wild are unknown, huge alligator snapping turtles are believed to be capable of living to 200 years of age, but 80 to 120 is more likely. In captivity, they typically live between 20 and 70 years. 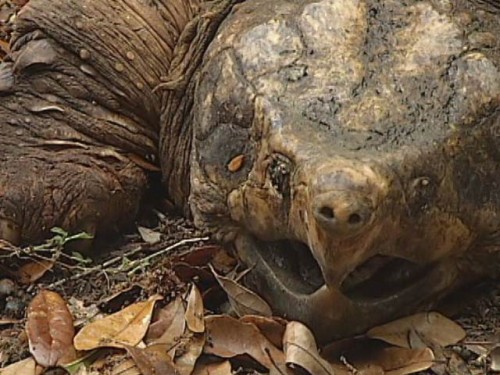 Did You Hear About the Huge Alligator Snapping Turtle Rescue?

Have you ever come across one of these turtles? I have, but it wasn’t nearly this large, and it was a common snapping turtle. It was very defensive of its territory, and there was no way that I was going to get near it. It looked like it meant business! Do you have a story to share?

7 thoughts on “Did You Hear About the Huge Alligator Snapping Turtle Rescue?”