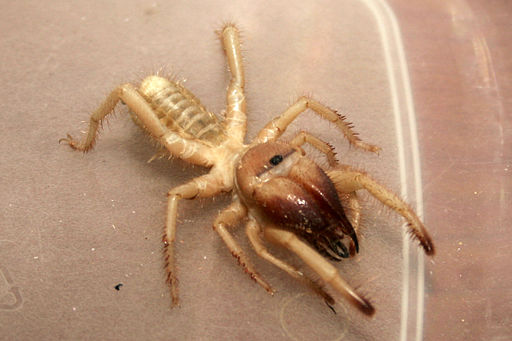 First of all, let me set the record straight. A camel spider bite hurts, yes, but your arm won’t rot off, as the Internet will have you believe. So if you’re here reading this because you’ve been bitten, ignore all those horrendous images on Google search and the like. Camel spider bites can be easily taken care of.

Oh, ignore the myths too. Camel spiders do not eat or chew on people while they sleep, they do not scream, they don’t disembowel camels and eat their stomachs, and they don’t chase people at 30 mph. (Camel spiders can, however, run at 10 mph.) However, if one DOES run after you, eek!, know that they only want to be in your shade, so stop running, for Pete’s sake. They do bite, but prefer insects, lizards, rodents and snakes to human flesh.

What is a Camel Spider?

The camel spider is not actually a spider at all. It is an arachnid in the order Solifugae, which means, “those who run away from the sun.” Camel spiders are bulky, brown, bushy and vicious spider-like animals. They are also known by the names – Sun Spider, Sand Spider, Sun Scorpion, and the Wind Spider.

The abdomen of a camel spider is divided into fragments with lengthy hair that shines in the sun and shields its long legs. The most prominent and dangerous part of this spider’s form is its piercing plier-like jaws which are used to crush and chomp their prey. The length of the camel spider is not fixed and differs across classes, reaching from 0.5 inches up to 6 inches.

By JonRichfield (Own work) [CC BY-SA 3.0 https://commons.wikimedia.org/wiki/File:Solpugidae_showing_eyes_with_presumably_protective_bristles_2012_01_24_1019s.JPG#/media/File:Solpugidae_showing_eyes_with_presumably_protective_bristles_2012_01_24_1019s.JPG, via Wikimedia Commons

Where is the Camel Spider Found?

Camel spiders are mostly found in deserts. They are opposed to sunlight and during the day, bury themselves in the soil or sand to guard their body from the day time high temperature. Camel spiders are night-time creatures that become active after sundown.

If you are sure that you have been bitten by a camel spider, then you must have one or more of the symptoms mentioned below:

A camel spider bite results in severe, hurtful pain, because of its pincers.

According to Health Whoop, a camel spider bite shocks the surrounding tissues, resulting in inflammation and redness of the skin around the wound. This inflammation is a normal response of the human body to the spider’s bite.

Depending on the harshness of the bite, extent of the attack, size of the spider, and area of the body that has been bitten, slight-to-profuse bleeding may occur.

Since these animals are non-venomous in nature, a camel spider bite can be cured at home without medical intervention from a doctor. An exception to this would be if the injured person has a medical condition such as diabetes, high blood pressure, thyroid disorder, or allergies, in which case it would be better to consult a doctor to avoid further complication.

If bitten by a camel spider, the following treatment should be started immediately:

If you monitor the wound carefully, a camel spider bite should heal completely in a couple of weeks. If difficulties arise (vomiting, dizziness, fever), your doctor may recommend dusting the wound, scraping off the area of the bite, a tetanus injection, and a strong course of antibiotic.

A QUESTION FOR YOU: If you were chased by a camel spider … would you run?

An Illustrated Guide to Wildlife : From your Back Door to the Great Outdoors

Disclosure: Animal Bliss is an Amazon  affiliate and will earn a (very small) commission from purchases made through links on this website.