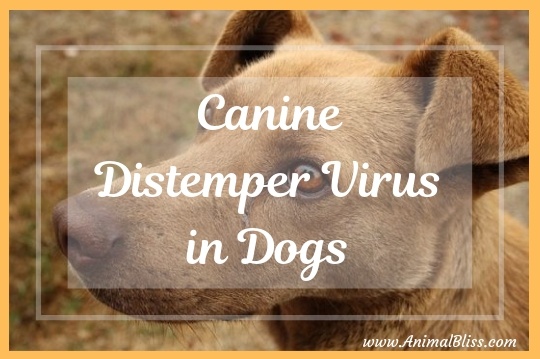 What is Canine Distemper Virus?

Canine Distemper Virus (CDV or CD) is a highly contagious viral condition that affects domestic dogs, particularly young, unvaccinated puppies, or immunocompromised or unvaccinated older dogs. It can also be found in and carried by many species of wildlife, including most Canidae (wolves, foxes, skunks) as well as raccoons, domestic ferrets, badgers, otters and more. The distemper virus is multisystemic, but most commonly affects the respiratory and gastrointestinal tracts of infected animals initially, and the neurologic system in later stages.  The most common mode of transmission is through aerosolized respiratory secretions (coughing and sneezing) of infected animals, or direct contact with mucous membranes or bodily fluids, and is fatal in at least fifty percent of cases.  There is no known cure for CDV, and treatment of the virus is focused mainly on supportive care while the illness runs its course, as well as strict quarantine to prevent its spreading to other patients.  CDV is extremely preventable; the modified live distemper vaccine is highly effective and is an essential part of any vaccine protocol for young puppies and domestic dogs.

How does a Dog Become Infected with Distemper?

CDV is transmitted from an infected dog to a new host via respiratory secretions when the carrier animal coughs or sneezes, releasing small particles into the air. It can also be passed on through direct nose to nose contact, or from sharing food or water bowls with an infected animal. For this reason, kennels, boarding facilities, and shelters offer a perfect setting for the rapid spread of this deadly virus, making strict vaccination, sanitation and quarantine protocols at these facilities vital for keeping the distemper virus at bay.

Signs of Distemper and Progression of the Virus

A dog that has come in contact with a carrier and is infected with CDV will generally develop a fever in 3-6 days, and stop eating. No other outward signs will be observed at this time, but a blood test will typically show a low white blood cell count (leukopenia), indicating a viral infection. This initial fever will subside and then be followed several days later by a second fever and the onset of other symptoms of distemper, including:

In some cases (but not all), an infected dog may develop and exhibit neurologic symptoms including:

The development of neurologic signs is most commonly associated with a longer course of illness, with these distemper symptoms showing up in the later stages for some dogs infected with distemper.  The course of the disease typically runs around ten days, but neurologic symptoms may take several weeks to appear as the damage to the central nervous system continues to progress internally until outward symptoms are observed. Dogs that survive the acute stages of the virus may remain long-term carriers of the virus and develop other outward signs of previous infection, such as:

Thickening and hardening of the foot pads is something that would be seen in advanced cases of CDV infection and would not likely appear until the neurological symptoms are already apparent.

It would not be something you would check for (during grooming for instance) as an indication of possible infection – the dog would already be very, very sick by the time this symptom appeared. It would more commonly be observed in an older dog that survived a distemper infection as a pup.

Because distemper is a dynamic virus that affects multiple body systems, it can present itself in many different forms, and symptoms can appear similar to other common canine viruses such as Leptospirosis, Infectious Canine Hepatitis, or Rocky Mountain Spotted Tick Fever. Canine Distemper Virus should be considered a possibility in any case where the patient has a fever and multisystemic symptoms.

RELATED:
Canine Influenza, Dog Flu is Contagious and on the Rise

Most veterinarians are familiar with the classic clinical signs of distemper in dogs, but because it can mimic the clinical symptoms of several other infectious diseases, it is often necessary to confirm a tentative diagnosis with additional laboratory testing. Because the CDV vaccine is a modified live virus, an RT-PCR laboratory test is the only way to distinguish between vaccine antibodies and natural infection.

Exposure of a dog to CDV is generally through aerosolized secretions where the virus infects the epithelium of the upper respiratory tract. This causes conjunctivitis (inflammation of the tissue lining the eye) and rhinitis (irritation/inflammation of the lining of the nose), resulting in copious ocular-nasal discharge. The most common and easily obtained sample to submit to the lab for diagnosis of CDV is a conjunctival or nasal swab, presented in a viral transport medium or sterile tube. Diagnosis can also be made from a whole blood sample, tracheal or vaginal smears, urine sediment, bone marrow aspirate or a CSF (cerebrospinal fluid) sample.

Because of the destructive, and often fatal nature of the virus, diagnosis is often made post-mortem by submitting tissue samples from the lungs, lymphoid tissues, kidneys, and brain at the time of necropsy.

There is currently no known cure for CDV, so treatment of the illness is focused mainly around offering supportive care to the patient. Intravenous fluids are imperative to prevent and manage dehydration from vomiting and diarrhea and may also be used to administer supplemental IV nutrition for dogs that cannot eat for extended periods. Administration of systemic antibiotics helps prevent and treat secondary bacterial infections that may occur as a result of a depleted immune system. Nebulization of antibiotics has been shown in some cases to help prevent pneumonia, which is a commonly seen secondary condition in patients with CDV.

Other supportive care includes management of high fever with antipyretic medications, as well as anti-diarrheal and other medications to slow intestinal motility and soothe and coat the intestinal lining. Anti-convulsant medications such as Diazepam and Phenobarbital may offer some relief to dogs suffering from neurologic symptoms. Because treatment of dogs with the neurologic form of the disease is often unsuccessful, with neurologic symptoms persisting long term due to permanent damage to the central nervous system, euthanasia is often recommended in those cases.

Experimental work with antiviral agents has shown promising results in a lab setting but is not a standard treatment for clinical CDV at this time.

There are a number of vaccines available that offer effective, long-lasting immunity to the Canine Distemper Virus. Most of these vaccines are in a modified live virus (MLV) form, where a small amount of the actual virus is weakened and attached to a harmless carrier virus for transport, resulting in long term protective antibodies. Puppies are typically given their first vaccination at six weeks of age, with additional vaccine boosters being administered every 3-4 weeks until 16 weeks of age.  In the past, annual re-vaccination was standard practice, and most vaccines are still labeled for annual administration.  However, substantial evidence in recent years shows that immunity from the MLV vaccinations offers antibody protection for at least three years in healthy dogs.  A dog’s immunity can be affected by several factors, including their past vaccination history, the health of their immune system, risk of exposure, and the existence of any immuno-compromising conditions.  It is imperative that dog owners follow their veterinarian’s recommendations for a vaccination protocol based on their pet’s individual needs.

An alternative vaccination option is to inoculate puppies at 6-7 weeks of age with the human measles virus vaccine, followed by at least two boosters of the MLV distemper vaccine given at 12 and 16 weeks of age. This is an effective protocol, as CDV and the measles virus are very closely related. This protocol is most often used in cases where high levels of maternal antibodies are present, posing the challenge of increased vaccine interference.

Humans and the Distemper Virus

The Canine Distemper Virus is very similar to the Human Measles Virus, so much so that their vaccines offer the same immunity cross-species.  At this time there are no known cases of a human becoming infected with CDV. Unlike the measles virus that only can infect humans, the ability of the canine distemper virus to mutate and infect multiple species of wildlife in addition to domestic dogs indicates the possibility that future mutations of CDV could become infectious to humans, though not likely in this day and age of modern medical technology.

CDV is a deadly, contagious virus that can infect domestic dogs as well as multiple species of wildlife. With a number of highly effective vaccines available, and more and more pets having widespread access to those vaccines, outbreaks of CDV are increasingly rare. It is important to remember that, even though the incidence in domestic dogs is low, that it is still present in the environment, and that our pets may still be exposed, making vaccination against this potentially fatal virus an important part of your pet’s routine veterinary care.

Have you ever had a dog with the Canine Distemper Virus?