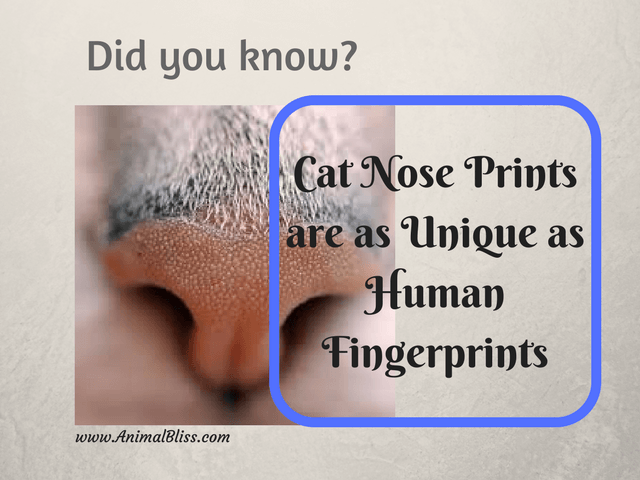 Cat nose prints as unique as human fingerprints. Really?  Did you know that?  Yes, It’s true!

Take a close look at your cat’s nose.  You will notice little bumps and ridges.  (Dogs have this same unique trait and since their noses are bigger than cats’ it is easier to see on a dog.)  The prints are exclusive to each animal and can be used for identification, just like your fingerprints can.

The method used at present for identifying our pets is through a microchip implant which can (and has) dislodged or malfunctioned, thus becoming useless.

But nose prints, like our fingerprints, will always be there.  Maybe someday microchips will be replaced with nose scanners.  Cats (and dogs) could be scanned when we adopt them and keep those scans on file for comparison if our pets should ever become lost or stolen.

This would be less costly than the microchip, and less painful as well.  As easy as getting fingerprints taken.  Scanning noseprints would have quite an impact on the numbers of animals restored to their proper owners, particular after hurricanes and other cataclysmic disasters.

(I did some research to find out if any company has patented a nose print ID scanner but only came up with one that went out of business some years ago.  If you discover any, perhaps you can let me know, and I will add it here.)

Here is another interesting fact or two about a cat’s nose that you may not know.

Did you know that a cat’s sense of smell is more than 14 times as sensitive as ours?  Wow.  Can you imagine walking around all day smelling 14 times better than you can now?

Cats also have a unique scent mechanism on the roof of their mouth, just behind their incisors, called a vomeronasal organ (VMO) or Jacobson’s organ. Scientists believe the VMO is used primarily for detecting pheromones. A cat parts her mouth slightly to open the ducts leading to the VMO and gently inhales, passing air and scent molecules over the VMO. This act is often accompanied by nose lifting, eye squinting and sometimes a flattening of the ears that make the cat look as if she is grimacing. This posture is called the “Flehmen response”, from the German flehmen, which means ‘to curl the upper lip.’  See also WIKI for more on this topic.