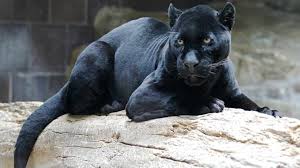 This is the story of a leopard named Spirit and Anna Breytenbach, an “animal communicator.”  Anna has dedicated her life to what she calls interspecies communication. She sends detailed messages to animals through pictures and thoughts. She then receives messages of remarkable clarity back from the animals.

In this story, Anna transforms a deadly snarling black leopard, initially named “Diablo,” into a relaxed and content cat renamed “Spirit.”  It is a fascinating tale of a beautifully wild cat.

Diablo was taken in at a sanctuary after having come from a zoo where he was badly abused. The owner of the sanctuary got along very well with the other wild cats in his care, but Diablo was a whole other situation.  Even after six months in the sanctuary, Diablo never left his night cage.  He hissed and snarled, and even bit the owner once, landing him in the hospital for a week from the bite.  He looked full of hatred, deadly and very dangerous.

With much skepticism, having nothing to lose and at wit’s end, Anna Breytenbach, known as an “animal communicator.” was called in.  The change in Diablo while with Anna was visibly different … more relaxed.  She was very calming.

After communicating with Diablo, it was established that Diablo didn’t understand that he was safe here, free to roam, relax, and be at ease, that no one was going to hurt him, that he felt misunderstood.  He said he didn’t like his name and the connotations of it.  It brought forth negativity, evil.

So they changed his name to “Spirit.”  Next thing you know, shortly afterward, Spirit is out of his cage, roaming freely, even interacting with the owner of the sanctuary.  The owner even realizes that he can also communicate with the cats, now that he recognizes it for what it is.

He is overcome with emotion after all this transpires, filling him with an awe that he can’t put  into words.

I realize that all of you won’t believe that communicating with animals is possible.  If you’ve watched the video, you will hear one part where Anna relays a question that “Spirit” has asked about something from his past, that even the owners had forgotten about.  They became believers at this point.

Want to learn more about Anna and the science of animal communication?  Visit her website at AnimalSpirit.org

I hope you have enjoyed reading about, “A Leopard Named Spirit”

MY QUESTION FOR YOU:  What do you think?  Is this possible?  Have you ever experienced communicating with an animal?  Would you love to?  (I sure would!)