Marine Iguanas of the Galapagos

Marine iguanas (Amblyrhynchus cristatus) is the world’s only marine lizard, and are found only on the Galápagos Islands’ rocky shores in warm to comparably cold water. Marine iguanas have the ability to forage in the sea and have adapted well to the harsh marine environment.  These marine reptiles can dive over 9 m (30 ft) into the water.

Marine iguanas are medium to large lizards, with blunt noses for grazing on seaweed, with flattened tails, allowing them to swim gracefully. These lizards are slow-moving on and somewhat clumsy on land but have powerful limbs with strong claws to help them cling to rocks. They are grey to black in color and may have blotches of coppery green and red according to the season. These iguanas have obelisk-shaped dorsal scales running from the head to the tail. Males are considerably larger than females, though the sexes are similar in appearance. Juveniles also look the same but are generally darker in color. 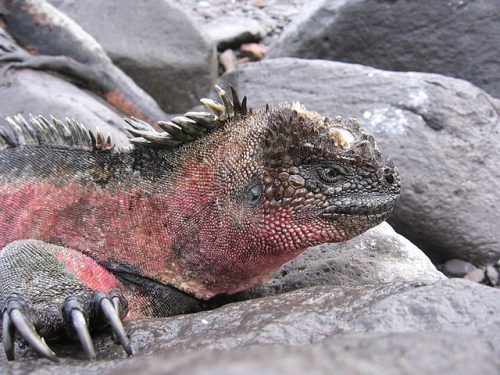 Marine iguanas vary in body size, depending on which island the individual iguana inhabits. The largest iguanas live on the islands of Fernandina and Isabela, weighing a maximum of 12–13 kg (25 to 30 pounds). The smallest are found on the island on Genovesa and weigh 1-2 kg (2 to 4 pounds). The difference in size is thought to be due to water temperatures and the availability of seaweed.  Adult marine iguanas tend to weigh approximately 70% more than adult females.

Males are selected by females on the basis of their body size, the females showing a preference in mating with the larger males. Females lay between one to six eggs, which the males protect. The eggs to incubate for 3 months in nests dug 30–80 cm (12-25 in) deep in sand or volcanic ash.

Related:
Jamaican Iguana Thought to be Extinct Makes a Comeback

The marine iguana forages exclusively on algae, which varies in accordance with the algal abundance, preferences, and foraging behavior. Only 5% of marine iguanas dive for algae offshore, and these individuals are the large males.

The marine iguana’s flat snout and sharp teeth enable it to browse on algae growing on rocks. A nasal gland filters its blood for excess salt ingested while eating, which is expelled through the nostrils, often leaving white patches of salt on its face.

Interesting fact: During an El Niño cycle in which food diminished for two years, some were found to decrease their length by as much as 20%. When food supply returned to normal, iguana size followed suit. It is speculated that the bones of the iguana actually shorten as shrinkage of connective tissue could only account for a 10% change in length.

After the marine iguana spends time in the cold water diving for algae, it is unable to move effectively, making it vulnerable to predation, so it must bask in the sun to warm up.

The marine reptile has a highly aggressive nature and uses their extremely sharp teeth to harm another. Fights sometimes occur during the breeding season but are generally harmless; they will bob their heads as a threat and if the other suitor responds, both will thrust their heads together until one backs away.

The marine iguana is labeled as vulnerable in its conservation status. The iguana is only known to be living in the Galapagos Islands and its population has been gradually decreasing throughout the years. Since the environment in which they live didn’t have many natural predators they never developed the defenses needed to help protect them against new enemies. This lack of development makes them more vulnerable to attack and becoming ill due to new bacteria as these islands attract more and more people and animals from different parts of the world.

Although it is unintentional, humans are one of the big threats to this species. The marine iguana has developed over time in a fairly safe environment and thus does not have a very strong immune system. This leads to a higher risk of the iguanas catching infections that they aren’t used to and that their bodies are equipped to protect against thus contributing to their endangerment.

The marine iguana is completely protected under the laws of Ecuador and is listed under CITES Appendix II. The total population size is unknown, but the International Union of Conservation of Nature estimates that at least 50,000 exist, while estimates from the Charles Darwin Research Station are in the hundreds of thousands.

Would you be interested in reading more posts of this nature?