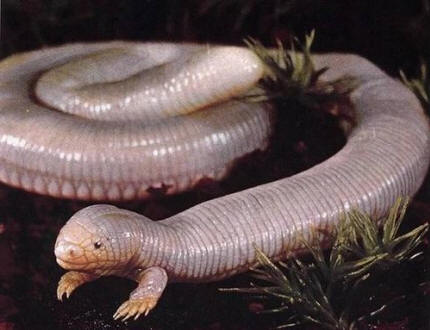 The Mexican Mole Lizard, or Bipes biporus, is an odd looking creature.  It looks like a long earthworm with two front legs with claws that act like paddles.  It burrows in porous soils, just like an earthworms.  It’s not a true lizard but it’s closely related to lizards and snakes and belongs to the small suborder Amphisbaenia which is endemic to Baja California, Mexico

The Mexican Mole Lizard is also commonly known as the five-toed worm lizard.  It is one of four species of amphisbaenians that have legs. It should not be confused with a salamander.

About the Mexican Mole Lizard

Mexican Mole Lizards are pink, lizard-like reptiles, 18–24 cm (7.1–9.4 in) snout-to-vent length and 6–7 mm (0.24–0.28 in) in width.  They live for one to two years. Their skin is closely segmented to give a corrugated appearance, and like earthworms, their underground movement is by peristalsis of the segments.

The forelegs are strong and paddle-like, while the hindlegs have disappeared, leaving behind only vestigial bones visible in X-rays.  The feet fold back for a “swimming” motion, yet come into play for guidance and  digging.

This species is oviparous and the females lay one to four eggs in July. The species only breeds underground. The eggs hatch after two months.

The Mexican mole lizard is found only in [Xochimilco], Mexico.

Like all other amphisbaenians, this burrowing species only surfaces at night or after heavy rain.

This carnivore eats ants, termites, ground-dwelling insects, larvae, earthworms, and small animals including lizards. It usually pulls its prey down to the ground to start its meal.