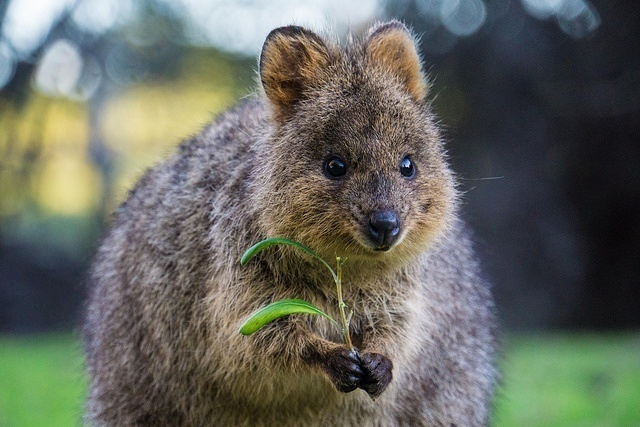 Q is for Quokka Facts:

The quokka (Setonix brachyurus) is a type of nocturnal marsupial. It can be found on some smaller islands off the coast of Western Australia, in particular on Rottnest Island just off Perth, and Bald Island near Albany. The quokka is the only mammal to live on the island of Rottness. Quokkas were first described by Dutch sea captain Willem de Vlamingh, who reported finding “a kind of rat as big as a cat.” He named the quokkas’ island Ratte nest (“rat’s nest”), and then sailed away. Following are some additional Quokka facts of interest.

It is illegal to handle quokkas in any way on Rottnest Island. If caught, a person will be served an infringement notice and a $300(AUS). In addition, prosecution of the offense can result in a fine of up to $2,000(AUS).

Conservation Status of the Quokka

The IUCN Red List classifies the quokka as vulnerable due to declining populations and loss of habitat from logging and development. Threats include foxes, dogs, and cats on the mainland, which has limited their population. On Rottnest, there are no foxes, dogs, or cats, but human visitors have killed quokkas out of cruelty.  Quokkas are also at risk of developing muscular dystrophy, a disease in which muscles are damaged and weakened.

Thank you for reading, “Q is for Quokka Facts”


Had you heard about the Quokka before today?

3 thoughts on “Q is for Quokka Facts : A-Z Collection of Really Cool Animals”