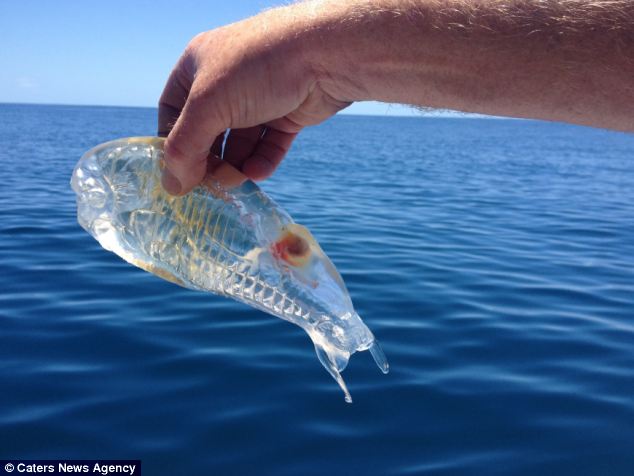 Being from Nova Scotia, the thought of finding strange sea creatures along the shores of the Atlantic intrigues me, as long as they pose no threat to anyone or anything, of course.

During the fall and winter, fishermen have been finding these jelly-like creatures in lobster traps, and others have reported seeing them on the beaches.

The strange sea creatures are called, “salps.” They are gelatinous, mostly transparent, and have long, cylindrical, hollow bodies.

They resemble jellyfish, but are actually classed as tunicates. They feed on phytoplankton by pumping water through their bodies and are more closely related to vertebrates.

Salps are the fastest-growing multi-cellular animals in the world. Some species can grow as fast as 10 per cent of their body length each hour.  Some of the salps being found are the size of a human hand.

In ecosystems where they are common, salps vary in diameters from a few millimetres at birth and to about 10 centimetres.

The question is whether the salps are an invasive species, due to climate change and scientists don’t know what is controlling the salp blooms in the region.

Our scientists would be very open to getting more information on ongoing observations of salps in the lobster fishery and elsewhere. Those observations can provide useful ancillary information for us to understand what’s happening in the shelf ecosystem in our region.

Meanwhile, the public is being asked to come forward if they have kept any specimens or have any information about these strange sea creatures. If you have salps catches to report, email AZMP-PMZA@dfo-mpo.gc.ca

I hope you have enjoyed reading about, “Strange Sea Creatures“

You might also enjoy, “Garbage versus Nature – What are we doing? Video about Life and Death“

Tell me what animals you would like to learn more about.