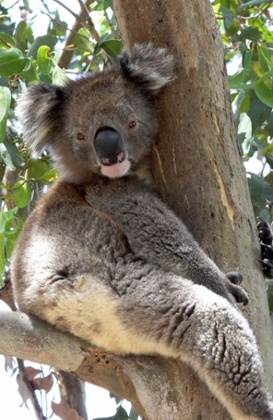 Why Do Koalas Hug Trees?

So … why DO koalas hug trees?  Do you know?  Take a guess first, before I tell you their secret.

Scientists did some poking around and found out that Koalas actually hug trees to keep COOL during hot weather!  This is not its usual posture.

With Australian heatwaves increasing in length and intensity, koalas have developed a new behaviour to deal with the heat – spreading themselves out across a cool surface, listless and flat.

Tree-hugging koalas sprawled across the lower, cooler branches to cool down by using the dramatically lower temperatures inside trees, researchers have discovered.

A study of a koala population conducted on French Island, near Melbourne, found that significantly cooler temperatures in tree trunks and thick branches during a heatwave provide relief to the animal which, unlike a lot of tree-dwelling mammals, does not use hollows or dens for shelter.

The researchers used thermal cameras in their studies to show how much cooler the tree is than the surrounding ambient temperature. The marsupials tended to hug the cool tree trunk tighter in hotter weather, trying to better transfer heat from themselves to the tree.  They made the most of the cooler branches by sprawling out along them. 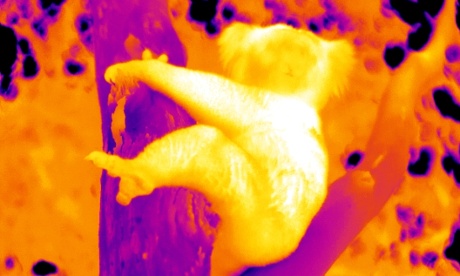 The researchers tracked 37 koalas with radio collars, then used a “portable weather station mounted on an extendable pole” to record microclimatic data right next to where the koalas were most likely to take a nap.

Koalas have been known to suffer high mortality rates during extreme heat, so finding ways to keep cool during events like the Australian heat wave they had earlier this year crucial to the koalas.  This scientific project is part of a larger project investigating how climate change is affecting land animals in Australia.

Trees they heat up and cool down more slowly that the ambient conditions. When it’s the peak heat of the day in terms of the air temperature the tree may not have caught up yet.  Also, the trees draw up cold water from underground.

“There are times when it gets far too hot for a koala in certain parts of Australia and that’s a constraint on where they can live,” he said. “That behaviour, that resource and micro climate in those trees are likely to be really important for a whole lot of other tree-dwelling species. It’s not just the koala that would use this behavior.”

Scientists predict the koalas will use this behavior more and more as climate change leads to longer and more extreme heatwaves, and further research is needed on how temperatures will affect the geographical distribution of populations of koalas and other animals. If it’s too hot then no behavioural method will work.

SOURCE for “Why do koalas hug trees?”  Biology Letters

I hope you have enjoyed, “Why Do Koalas Hug Trees? The Answer Will Surprise You!”

6 thoughts on “Why Do Koalas Hug Trees? The Answer May Surprise You!”