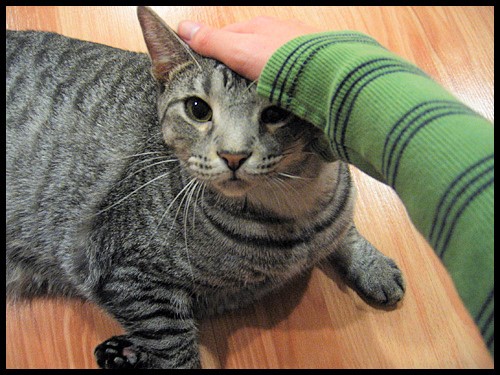 Why does my cat scratch me when I pet him? You know the drill. Your cat bounces on your lap while you’re working on your computer, rubs his head on you and wants you to pet him. Of course, you love your kitty and you’re very happy to oblige. At first, everything is great. Your cat is purring and seems to enjoy your attention. And of course, you love feeling his soft fur between your fingers as you stroke him.

And then, it happens.

Your cute cat seems to freeze for a second or two, and then he morphs into a mini-tiger that viciously scratches and bites you as if your hand was a giant rat or a big Angus steak.

Why Does my Cat Scratch Me When I Pet Him?

You scream and push your cat away, promising yourself that you will never fall into this kitty trap ever again.

Why do our feline friends sometimes betray our trust and scratch us when we pet them?

Actually, not all cats behave that way. Some of them can’t get enough love and affection. They demand petting and would never scratch you because they find it that good.

Then, you have the other extreme. Cats that are quite affectionate and love to rub against you, but that would never allow you to pet them because they hate it. It could be an innate nervous reaction, or because they never got used to being petted as kittens.

Most cats are actually in the middle. They enjoy a little bit of affection for a few minutes until they’ve had enough. Unfortunately, their favorite way to say they’re fed up is to maim our hands. This is called ‘petting and biting syndrome.’ What should you do to about with it?

First, you should accept the fact that for most cats, long petting sessions are not part of their natural behavior. Contact among cats is always short and even when they groom each other, they tend to do it for a few minutes only until one of them gets pissed off and scratches the other.

Often, cats like to be petted but not on their tummy nor on their hind area because it makes them feel vulnerable. If possible, avoid these areas and focus on your kitty’s neck and head so that he feels more relaxed. Needless to say, you should never touch or grab your cat’s tail!

Humans tend to expect a lot from their cats, but felines aren’t dogs. They’re more independent and not as affectionate as their canine counterparts. By trying to pet, kiss and hug their cats too much, their owners end up stressing them and they might lash out in retaliation. Instead, you should read your cat’s behavior and stop petting him when you feel like he’s had enough. Don’t insist, even if you are disappointed in his behavior.

The most important thing is to look out for signs of stress: if your cat seems to freeze, his ears suddenly pointing backwards and his tail lashing back and forth like a whip, watch out! There’s a very high chance that he will scratch you. Stop petting him and wait for a little while. With time and patience, lots of cats learn to enjoy being petted, even if these stroking sessions don’t last for more than two minutes at a time.

Cats are unpredictable and a little crazy sometimes. That’s why we love them!

Guest Writer Bio: Travis Atkinson works at Petplan New Zealand. He loves food, travel, and more than anything, animals (even sharks and crocodiles).

5 thoughts on “Why Does My Cat Scratch Me When I Pet Him?”