Warning: call_user_func_array() expects parameter 1 to be a valid callback, class 'collapsArch' does not have a method 'enqueue_scripts' in /home/customer/www/animalbliss.com/public_html/wp-includes/class-wp-hook.php on line 307
Working German Shepherd Dogs, Not Just a Pretty Face - Skip to content 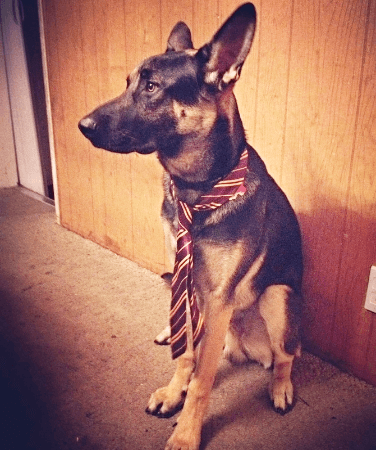 This is my beautiful boy, Baymax. He is nine months old, and a lovable handful. He came into my life suddenly and with a vigor, I was not quite prepared for when he was just six weeks old. He was (and is) like no other dog I’ve ever had. So, I did research on German Shepherd Dogs. A LOT of research, and learned a great deal about this unique breed.

German Shepherd Dogs are a breed that stands out among the rest. They are highly intelligent, have an enduring work ethic, and are steadfastly loyal. While they can make a great house pet, they really thrive as working dogs. They need mental exercise just as much as they need physical exercise, and putting them to work fulfills both those needs. German Shepherds can be trained in a number of different fields and are successful in each of them.

The work field most synonymous with German Shepherds is law enforcement. Because of their high working drive and loyalty, they are the number one preferred breed for police forces around the world. The K-9 Unit system is usually one officer/handler to one dog, and the bond between them creates an unstoppable team. German Shepherds are unique in that they can be successfully trained to perform a number of work duties such as criminal apprehension, defense, search and rescue, and cadaver searches. They are also well adept at drug and explosive detection, making them excellent U.S. Customs assets in addition to police work.

For the same reasons that German Shepherd Dogs are the preferred choice for law enforcement, they are also favored as military dogs. Their ability to adapt to many different environments, as well as their intelligence and dedication, make them perfect for military conditions.

Historically, German Shepherd Dogs began their work in the German Military in World War I, and by World War II, they were utilized by the United States Military as well. They were used as messengers, allowing soldiers to discretely communicate. They were also utilized as guard and rescue dogs. Today they continue their military service with added abilities like explosive and weapon detection. Once they are retired, they can be adopted by their handlers, which is preferred, as the bond, they form during their service years is extremely strong.

While the typical image of a seeing-eye dog is that of a Labrador or Golden Retriever, German Shepherds were actually the first breed to be trained as guide dogs . Back in the early 1900’s, an American woman named Dorothy Harrison Eustis was breeding and training German Shepherds in the Swiss Alps. After an article was published on her work training dogs to guide veterans who were blinded by mustard gas, a blind man named Morris Frank contacted Dorothy and asked her to train a dog for him. She invited him to Switzerland to train with a dog he named Buddy. Morris and Buddy returned to the U.S and were intricate in opening doors for guide dog access and providing a new way for blind people to become independent. Dorothy and Morris eventually opened “The Seeing Eye,” an organization for breeding and training guide dogs that still exists today. German Shepherds are still used as seeing eye dogs, though at a lesser rate than before, as their strong will and stubbornness results in a lower success rate than Retrievers.

Being that they are most known for their law enforcement and guide dog work, it’s sometimes easy to forget that German Shepherds are just that: shepherds. German Shepherd Dogs were originally bred as herding dogs . In 1899, the first Deutscher Schäferhund (lit. translated German Shepherd Dog, making it the only breed to have “dog in its official name) was bought and named by Max von Stephanitz. He prized the dog by because of its endurance and ability to protect and direct herds, as well as its natural beauty. The German Shepherd Dog still has a natural instinct to herd and protect, and makes an excellent choice for a farm dog.

With the versatility of German Shepherds, it’s obvious why they are one of the most popular dog breeds in the world. While their beauty alone is enough to admire them, their many attributes make them the perfect dog for just about any line of work, or even just as a family pet.

Guest Writer: Mila Sanchez is a writer and recent college graduate with a BA in Linguistics. Her ambitions in life include traveling the world, studying languages, and taking pictures of her dog, Baymax. See tons of pictures of Baymax on her Instagram: Mila Sanchez

Other Articles by Mila Sanchez:

Are you a fan of German Shepherd Dogs? (They are, by far, my favorite dog.

Disclosure: Animal Bliss is a Natural Wonder Pets and Amazon.com affiliate and will earn a (very small) commission from purchases made through links on this website.

Follow Mila
Mila Sanchez
Mila Sanchez is a writer with a BA in Linguistics. Her ambitions in life include traveling the world, studying languages, and finding a way to be a stay-at-home dog mom. Follow Baymax on Instagram at @baymaxvonderp
Follow Mila
Latest posts by Mila Sanchez (see all)