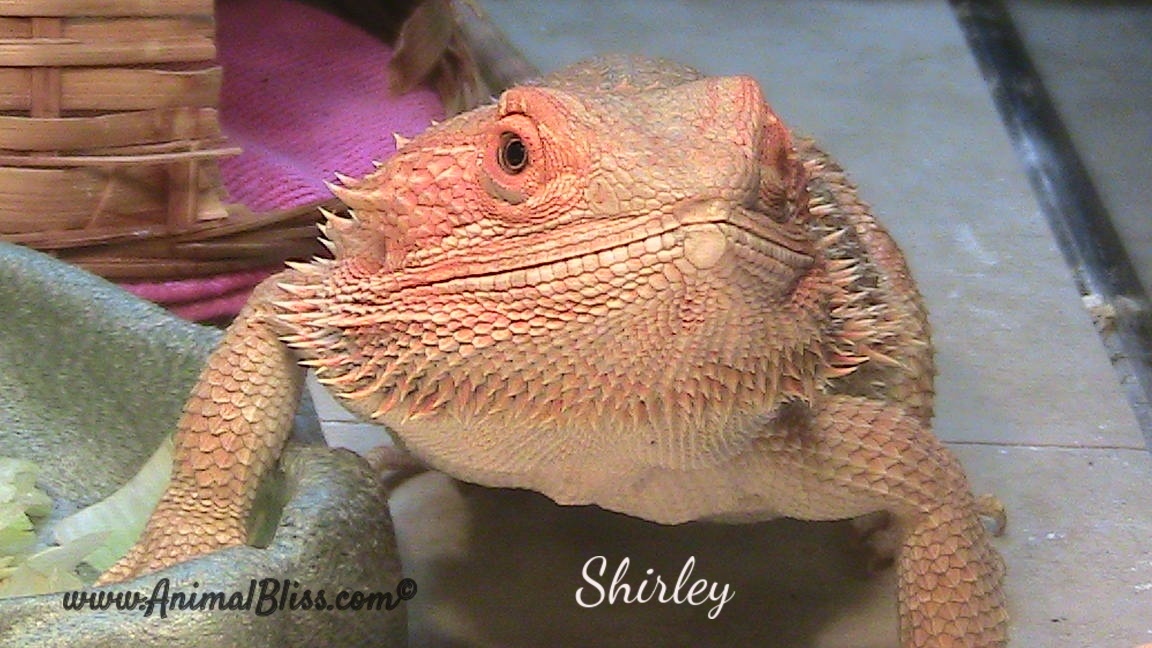 It’s that time of year again, when our Bearded Dragons have most likely gone into brumation.  For those that don’t know, brumation is like a hibernation, except they don’t shut down completely like bears do.  Brumation is a natural process that happens with light and temperature changes during the colder months of the year.  In this article, I want to talk about bearded dragon hydration during brumation.

(Read “Bearded Dragon Brumation Symptoms, What should I do?” for more in-depth information.)

In the wild, Bearded Dragons get their moisture the from rain and dew drops collecting on the plants they eat, or drink from pools of water if they can find it.   Brumation comes about as a result of the colder weather seasons causing their food sources to die down. With their main staples are gone, the beardies find shelter and dig down in the soil a little, taking in moisture from the ground.

Some bearded dragons in captivity won’t go through this process at all, due to consistent temperatures and lighting and a year-round source of food. In that case, your “beardie” will still eat, drink, and poop as usual.

But other dragons’ natural instincts and internal clocks take over and they brumate.  Some pet owners try to prevent this by extending their temps and light.  But please don’t attempt this.  They need the rest.

Some of you may already know Shirley, my Bearded Dragon.  She is almost 2 years old and I’ve had her since she was 5 weeks.  I love her to pieces.  Isn’t she cute?

I decided to write about bearded dragon hydration during brumation in particular because … well … I gave Shirley a good soaking today, took a few pics, and thought I’d share with you.  She’s not fond of baths and is seen giving me the ‘stink-eye’ here. 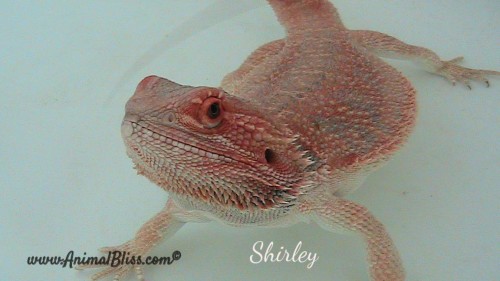 Shirley went into her brumation 2 months ago.  Last year she slept for 25 days.  For the first couple of weeks she was just doing some major snoozing, but she’s sleeping all the time now.  She has not lost any weight at all, nor is she dehydrated.

“Bearded Dragon Brumation Symptoms, What should I do?“

There are differences of opinion as to how to hydrate your Bearded Dragon, how often to do it, and if it’s even necessary.  My method generally is to soak her every week or so, but since she’s been sleeping so soundly this period, I thought I’d only do it when I thought it was really necessary for her.  Don’t judge me. 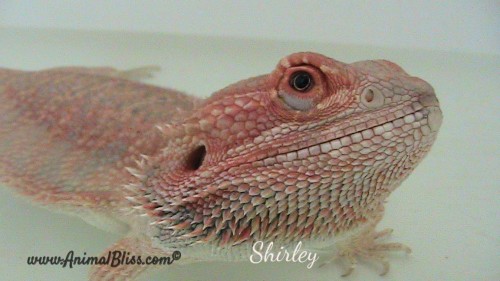 The reason for her bath today is because she was very dark on the top of her head and along her bath. Hence, she needed some warmth, at least, but did not appear to be dehydrated. I gave her a nice warm soaking for about 10 minutes. She changed back into her lovely bright orange / pink coloring within a few minutes.

IMPORTANT NOTE: If your Bearded Dragon doesn’t wake up or stays half-asleep during his soak, make sure you keep his head above water.  You don’t want him to get water into his lungs.  Do not leave him in the water unsupervised!

How do you know that your Dragon is dehydrated?  Pinch the skin. If the skin falls back into it’s normal state, they are fine. However, if it takes an extra moment or two to go back to normal, your dragon needs water.

Let me say here that a healthy bearded dragon will not lose much weight, if any, during brumation, even after a few months.  To make sure they’re healthy in the first place, it’s a good idea to get a fecal sample and get it tested for any parasites.

After Shirley’s bath, I put her under her basking lights so she could dry completely before going back into her “cave”, which is a basket turned upside down. A damp dragon risks attracting bacteria. 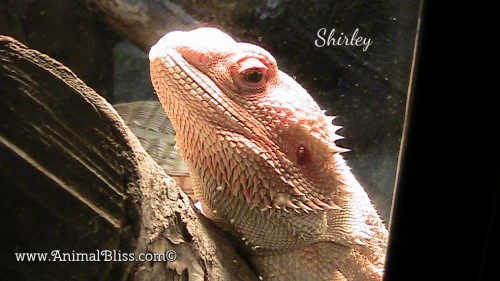 I miss my Shirley when she’s in brumation.  I do take her out of her enclosure from time to time, just to hang out with her a bit while I write blog posts and such.  She just stays asleep on my chest for the most part.  That’s what she’s doing now.

When it’s time to put her back, I tuck her in and shut off all her lights. 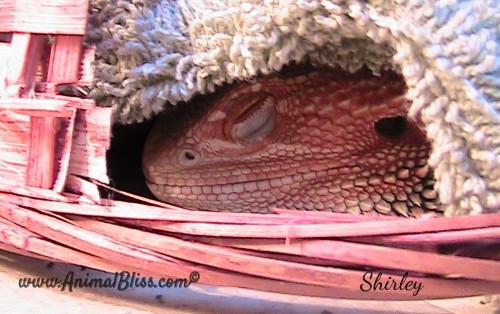 Do you have a Bearded Dragon in your home?