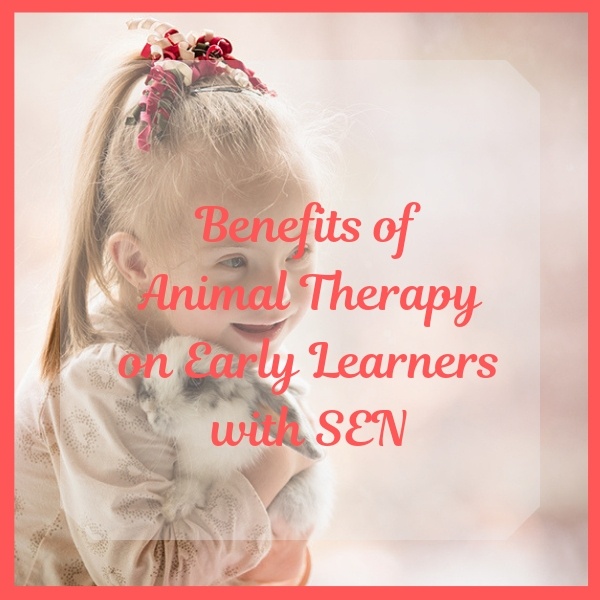 Benefits of Animal Therapy on Early Learners with SEN

Studies have shown that children with pet dogs have reduced levels of anxiety throughout childhood and multiple studies have found that animals have positive effects on children with autism. But how do the supposed brilliant benefits of animal therapy affect children at very early ages?

Animal Assisted Therapy is designated as a series of interventions using an animal to encourage participants towards a set of goals. Mostly, animals are used to record improvements in social interaction, physical health, and mental health.

Physical benefits of animal therapy on early learners with SEN

Animal therapy in early years classrooms with Special Educational Needs (SEN) children can have hugely beneficial effects physically, not only on the SEN child but on any children who interact with the pet.

The simple act of stroking an animal creates a sensory response which can be helpful in the development of fine motor skills. Introduce brushing for children with physical disabilities to help them practice holding things independently. Feeding animals from their hands can also create a positive response in children with disabilities.

Through stimulation and interaction, animals allow young children to practice their fine motor skills in an environment without judgment or stress which also has a host of other physiological and social benefits.

Generally, dog owners tend to have lower blood pressure than those who live in houses without pets, which could be related to the way animals promote exercise through walking and play, or it could be as a result of improved blood flow solely from the presence of an animal.

The soothing quality of petting an animal can help to relax children, which is often why therapy animals are used as a tool to help autistic children experiencing a meltdown to calm themselves. This action can lower blood pressure levels and raise the heart rate, which is beneficial for the general health of children with both physical and mental disabilities.

Through stimulation and interaction, animals allow young children to practice their fine motor skills in an environment without judgment or stress which promote physiological and social benefits. Click To Tweet

More distinctly with dogs than other therapy animals, children are encouraged to exercise when they are present. Schools with resident therapy dogs have the children walk the dog at break times either as part of an intervention or as more of a social bonding exercise between SEN children and their peers.

Regular exercise can strengthen gross motor skills and can be introduced as part of a routine for children who present with Autism to stay healthy.

Related:
Do You Have Depression? 3 Reasons You Need a Therapy Dog

As well as the physical benefits of therapy animals, using animals in the classroom for an early age can have social benefits which can help SEN children interact with adults and peers and even manage their own emotions.

Animals are vulnerable creatures which need our care. Many animal therapy programs encourage children to feed them, walk them, and clean them to help the children understand how to care for another living creature. Giving children a stethoscope to hear the animal’s heartbeat is a way for children with SEN to understand their relationship to the animal.

Caring for another being, in turn, promotes empathy as children begin to understand that every living thing has needs and how they can help towards meeting these needs in their interactions with others in the classroom.

Introducing the animal to the whole group can also work towards fostering empathy between SEN children and their peers. Able or neurotypical children learn the importance of caring for others and can be better equipped to interact with their SEN peers.

As previously mentioned, animal therapy promotes a space free of judgment or expectation which can be vital to children with disabilities in developing the trust of those in authority. Therapists in schools have noted that having an animal present gives children an excuse to visit them which in turn opens up a discussion to reach other objectives.

Children with and without SEN can sometimes have phobias of animals without ever having met them which can be particularly harmful to children with SEN whose phobias can affect their daily functioning through raised anxiety and distress in the presence of animals in an uncontrolled environment.

Some animal therapists specialize in introducing children to dogs to help alleviate their fears in a comfortable environment. Classroom animals introduced with the intention of helping children with their phobias can help to improve children’s self-confidence and have significant benefits outside the classroom as children are able to better self-regulate and maintain function when they encounter animals in public.

Studies using therapy animals can provide a good understanding of what benefits children could draw from their interactions, but given the minimal number of studies undertaken, the results are still inconclusive.

Interacting with animals increases our levels of oxytocin, which is one of the strongest positive social-emotional hormones we as humans produce. Click To Tweet

However, animal therapists such as Cynthia Chandler are confident that animal therapy is here to stay and is an essential tool in children’s therapy purely due to the oxytocin effect. Interacting with animals increases our levels of oxytocin, which is one of the strongest positive social-emotional hormones we as humans produce. Animals also reduce our levels of stress hormones like cortisol, meaning that even being in the presence of furry friends can have an immediate effect on a child’s body chemistry for good.

Overall, introducing animals to your early years’ classroom can create a more positive, relaxed environment which benefits all your children (and yourself!).

“Benefits of Animal Therapy on Early Learners with SEN”