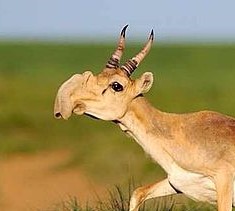 Why so Many Mysterious Deaths?

The endangered saiga antelope (Saiga tatarica) originally inhabited a fairly wide range, but today they can only be found in one location in Russia (steppes of the northwest Precaspian region) and three areas in Kazakhstan (the Ural, Ustiurt and Betpak-dala populations).

A proportion of the Ustiurt population migrates south to Uzbekistan and occasionally Turkmenistan in winter. The saiga antelope is extinct in China and southwestern Mongolia. It was hunted extensively in Romania and Moldavia until it was extinct in these regions in the end of the 18th century.

And now, it has been discovered that THIS MONTH ALONE, over 120,000 already-endangered saiga antelope have died in Kazakhstan. That’s half the world’s population of 240,000 that was estimated just last year.

An estimated 300,000 saiga roamed across the Kazakh steppes on May 11, when the first dead antelope was discovered. By May 27, nearly 121,000 carcasses had been found in three huge areas of their usual habitat.


The question remains: why did they die? Kazakh scientists are testing soil, air and water to try to solve the mystery of the mass deaths, and experts from Britain, Germany and the World Organization for Animal Health have gone to help. 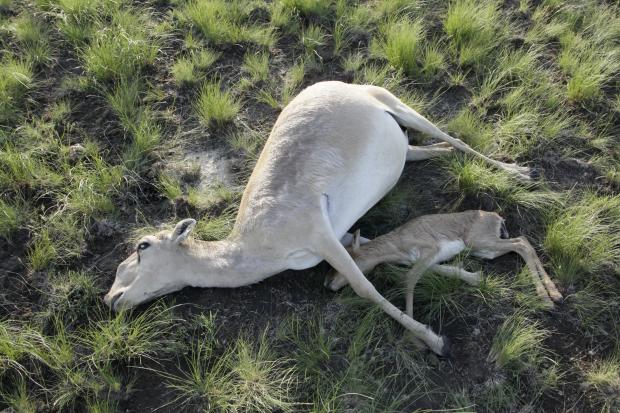 It’s possible that “natural” disease is the cause and there are a few theories on that. Another possibility, though, is that it might be from rocket fuel poisoning. Russian rockets are regularly launched from Kazakhstan’s Baikonur Cosmodrome, emitting a toxic fuel called heptyl, which The Moscow Times describes as:

“… a highly corrosive combination of hydrazine and nitrogen tetroxide, topped off with kerosene.”

The results of the investigation should prove interesting.  Meanwhile we shall wait and see whether these unfortunate deaths are caused from “natural” disease, or if man, once again, has caused yet another catastrophe on this poor earth we call home.

A Few Facts About the Endangered Saiga Antelope

The saiga stands about 2 – 2.7 feet (0.6–0.8 m) at the shoulder and weighs between 79 and 139 pounds (36 and 63 kg).  The horned males are larger than the hornless females. Their lifespans range from 6 to 10 years. The saiga is recognizable by an extremely unusual, over-sized, flexible nose structure, the proboscis. During summer migrations the saigas’ nose helps filter out dust kicked up by the herd and heats up the animals blood. In the winter it heats up the frigid air before it is taken to the lungs.