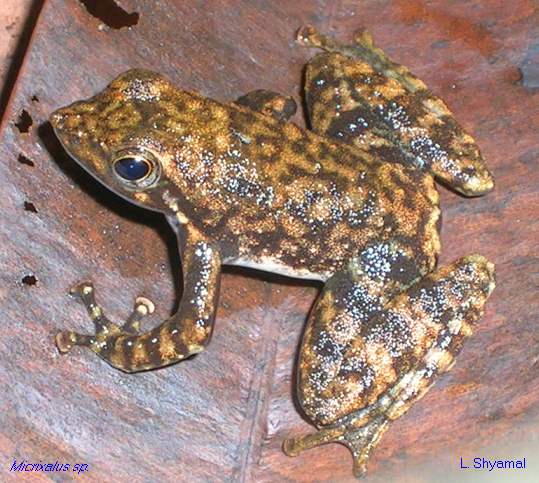 Fourteen new species of the tiny “Indian Dancing Frogs” have been discovered in the jungles of western India, which more than doubles the number of Indian dancing frogs already known.  The dancing frogs are thus named because of their foot-waving gestures of the males during the mating season.

Scientists believe these frogs have been around since the dinosaur era.  They measure 13 – 35 millimeters long.

The Indian dancing frogs got their name from the charming show they put on for the ladies during the mating season, which includes a bizarre display known as foot-flagging.

The male frog stretches a hind leg out from its body and waving a fully extended webbed foot. This raised foot also comes in handy for pushing rival males out of the way.

The female frogs lays her eggs in a cavity that she digs with the help of her hind limbs at the bottom of shallow-flowing streams.  She then covers it with sand and gravel, probably to stop the eggs being washed away and to protect them from fish or other predators.

Biju, the so-called frog man of India, is concerned about the impact of habitat loss caused by farming and other human activities on his latest discoveries.

“Over the last 12 years of my field studies on the dancing frogs, I have noticed fewer number of frogs in areas where they used to be abundant. Habitats of many species are drastically depleting or being modified.”

It was noted that 30 percent of the dancing frog species are found only in areas that aren’t protected by the government.

For the full report on the study that was led by Prof SD Biju from University of Delhi, published on 8 May 2014, visit http://www.frogindia.org.

You might also like: Hear the Mighty Roar of the DESERT RAIN FROG, World’s Cutest Frog Ever

9 thoughts on “Indian Dancing Frogs, Dancing Their Way to Extinction”