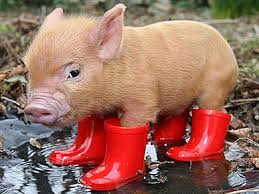 Whether you call them little pot belly piggy, micro pigs, or miniature pigs, you have to admit they are as cute as a button.  There are many misconceptions about pigs.  We’ve all seen pictures of those nasty big ‘ol farms pigs, rolling in mud, looking filthy.  Well, okay, maybe those ones are filthy, but I love them anyway.  But these little micro piggies are of a different breed.  Watch this video first of the best belly rub in the world, then I’ll tell you a little bit about the pot belly pig.

Cute, huh?  I love the little grunts and squeaks that little pot belly piggy does when the guy scratches his belly, don’t you?  And did you notice the smile?  Okay, he’s not really smiling, but let’s pretend, okay?

Miniature pigs, which are also known as, pocket pigs, or teacup pigs, by the way, first became popular as pets around 2009 or so.  They’re very smart intelligent animals and can be house-trained.  They do not shed and tend to keep themselves clean.

I personally raised 3 pot bellied pigs in my home, so I know this for a fact. They were kitty litter trained.  Stay tuned for another article with pictures to follow, one of these days!  I can hardly wait to share them with you!

Micro pigs can potentially make great pets, but there are considerably more risks involved when buying a micro pig over other common pets, such as cats or dogs.

Some towns and cities have ordinances forbidding farm animals within city limits, and since a pig is usually considered a farm animal regardless of its size, if you are considering getting a mini, check with the authorities in your area.

I raised my 3 little pot belly piggies in a city.  When I called the local police station to find out what the laws were, they just scratched their heads.  No one had ever asked them before and they had no idea.  Long story short, it was not a problem for the location I was living at the time.

Consider also that many small animal vets will not treat pigs. Since these animals have a life span of 15 to 20 years, they require long term commitment.

Due to their ability to bond, combined with their need for attention, people who have limited time for a pet may find a pig far more than they can handle.  The little pot belly piggy WILL, I promise you, get into mischief if left along too long.

Additionally, if pet pigs are not properly trained when they are young, just like a dog they can become very aggressive.

Thanks for watching and reading!   Click here for more little pot bellied piggy history and such.

I hope you have enjoyed, “This Little Pot Belly Piggy Gets a Belly Rub“

MY QUESTION FOR YOU TODAY:  Have you ever met a little pot belly piggy?  They really are adorable.  I used to take mine out for walks in the woods or to the beach.  They were real conversation starters.  I’ll write about them soon, and share some stories and pictures with you.  🙂

1 thought on “This Little Pot Belly Piggy Gets a Belly Rub, Mini Pigs”