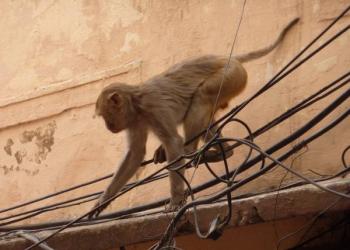 WHOA!  Did you see the video where the monkey saves electrocuted monkey friend? It’s gone viral, so you may have, but I’m including it here on my blog for those that haven’t.  It’s a must-see.

It may be a little hard to watch, and I think you need to know ahead of time that the monkey is trying to revive the other monkey, not beat him up!

Apparently he wasn’t trained in proper CPR, but, hey!  He did it.  He revived his monkey friend after it had been electrocuted while climbing on high tension cables overhead in a Kanpur Central Railway Station in India last Sunday.  The unfortunate monkey landed on the railway track, unconscious, immediately afterward.

Our little hero does everything he can to revive the other, including slapping, hitting, shaking, throwing, even biting the poor thing.  It looked like a vicious attack, actually.

The unconscious monkey eventually lands in some water.  It’s not really clear whether the monkey doing the saving dunked his friend, or if his friend fell in, but it seems to do the final trick.

After almost 20 minutes of these heroics, the victim was out of shock and its eyes were opened.  You can see the helpful friend pat him on the back.  Aww …  He later took him away from there and moved him to a safer spot.

WOW, right?  Just another day in the life of a monkey!

Thanks for reading my blog!

I hope you have enjoyed, “Monkey Saves Electrocuted Monkey Friend in Railway Station“