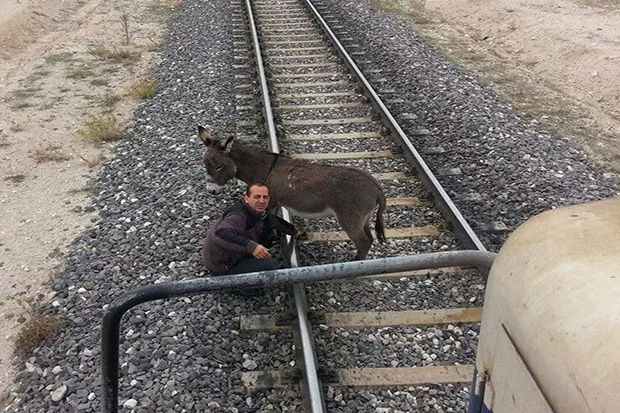 Donkey Tied to a Railroad Track

Gets Saved in the Nick of Time

I found an article today about a donkey tied to a railroad track in Nigde, Turkey last November.  What a bizarre story.  Apparently, someone thought it would be fun to tie the donkey to the train track and wait for the train to come!  Of course, they had to know that it would be killed.  Who would do such a thing?  I don’t understand.

Anyway, the title of that article was, “Someone’s an ass.  Luckily, someone else was an animal lover.”  Guess who that animal lover was?  It was the engineer driving the oncoming freight train.

Lucky for the ass (the animal, not the heartless person), the engineer saw the donkey tied to a railroad track up ahead and had barely enough time to stop the train to avoid hitting it.  How close was it?  The engineer said, “About 29 feet.”  Phew!  That really was too close.

Veli Şener, the train operator, is the man pictured here untying the lucky donkey.  The story doesn’t say what happened afterward.  Did the donkey make a mad dash out of there?  Did he get taken somewhere safe?  I wish I knew.  I would have wanted to adopt him.  But that’s just me.

You have to wonder if the bad guy(s) were somewhere nearby, waiting for the “fun” to begin.  How terrifying for the poor donkey.  Although it probably didn’t know exactly what would happen, it did know, I’m sure, that there was a huge thing barreling down the track toward it, and most likely wanted to get the heck out of there.  It had to be afraid.

The operator of the train was quoted by Turkey’s Hurriyet Daily News as saying,

“What kind of pleasure would the people who did this find in giving this animal such a death? Don’t they have a conscience? Damn them.” 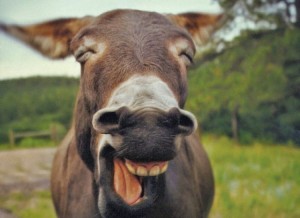 Donkey Tied to a Railroad Track Gets Saved Just in Time

How does this story affect you?

Disclosure: Animal Bliss is an Amazon affiliate and will earn a (very small, teeny tiny) commission from purchases made through links on this website.